Today we drove to Portland. Now, this is something that I wanted to do while we were Oregon, but I didn’t think we were going to get to. But we did!

Portland is very much like Vancouver. Same feel, same look, same crazy traffic and same parking. But I loved it! We parked downtown and walked around for a bit.  We definitely didn’t spend enough time here, but there is always next time!

Our first stop was Powell Books. Now for those of you who know us, you completely understand why we went here first! For those of you who are new to the Glavin family, the boys and I are bookworms. Like, fully, completely in love with books. So walking into Powell was overwhelming, and exciting and amazing!! This bookstore is literally a city block! A whole square block. We could have spent hours, possibly days, here. I need to go back. We probably spent an hour here, but if you like books and you like looking for old, unique books, plan to spend much, much more time here. The boys each got to choose a book (or two! How do you say no to books?!?) and I grabbed a couple of old novels to read to them that I enjoyed when I was younger. 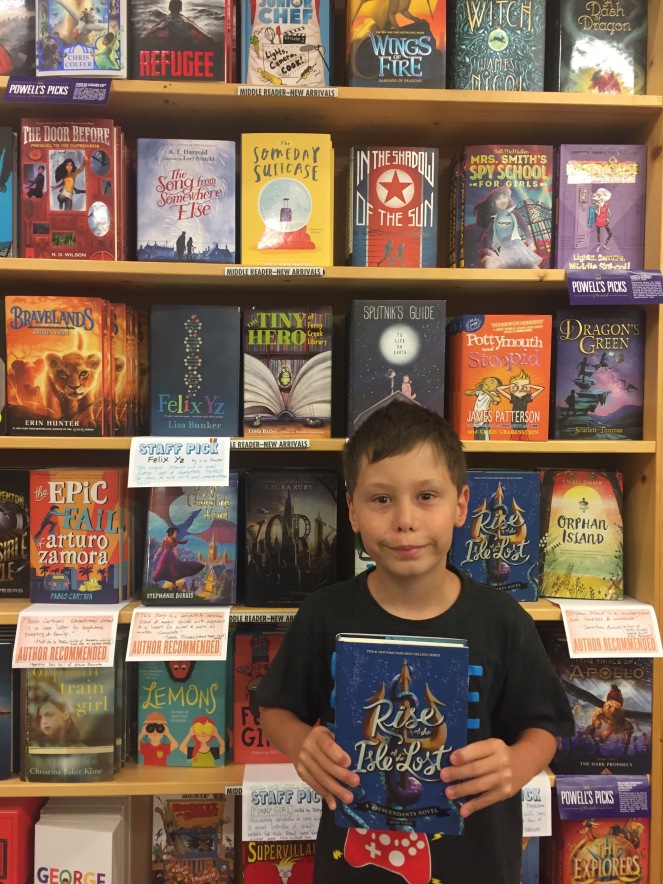 Next on our Portland list – Voodoo Doughnuts. Now, you may or may not like doughnuts (or donuts 😜), but you NEED to stop here. It was only about a 10 minute walk from Powell Books. As you get nearer, you start to see the pink boxes everywhere. Because ‘good things come in pink boxes.’ The building is pink and it has a very close resemblance to Dr. Facilier and voodoo dolls on the sign. We had to wait in line, but only for about 10 minutes. Personally, it was worth the wait. We ended up getting an assorted dozen donuts to bring back to the house. It was hard to chose which flavours to get. So many options! Sean and the boys ended up each getting a original voodoo doll and I got an apple fritter to eat right away! Sean really liked the doll, including the ‘blood’ center (it was jelly!). 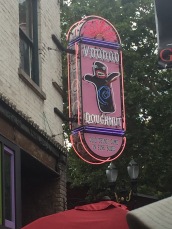 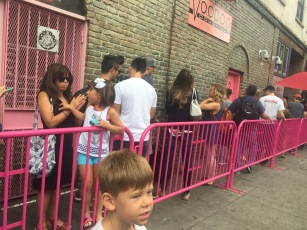 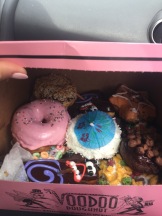 After that, we stopped at the Nike store and Starbucks. Not too much shopping, but had to get our You Were Here mug. We couldn’t decide on Portland or Oregon, but since we were staying in Oregon and only passing through Portland, we grabbed the Oregon one! Personally, I love it! It’s all purples and blues! On a side note, if anyone is driving through Portland and wants to bring us back a Portland mug, I would be much obliged!

We decided to make one final stop on the way back to the house. Captain Kid Amusement Park. There are go carts and mini golf. We decided to try both! The go carts were great. We had to go double as the boys were not 58 inches tall, and therefore couldn’t ride them alone. We ‘raced’ and Sean and Ethan won! Afterwards, the boys asked if we could play mini golf while we were there. We each grabbed our favourite colour ball and matching club. This is your typical old mini golf course with a little twist. A couple of the holes have spinners, that you have have to spin before your putt. There are things like ‘shoot with your eyes closed’, ‘use only your hand for your first shot’, ‘pick another player to shoot behind their back’, etc. I got 2 holes in one and was pretty impressed with my game! I beat Sean and I think that is a first for me! 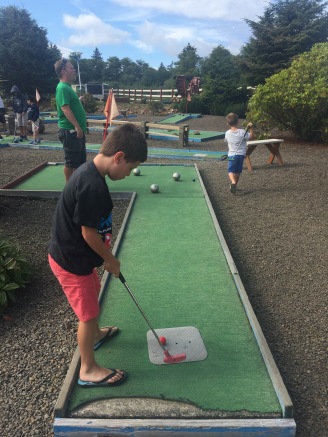 Back to our quiet beach house, and we decided to eat out for dinner. As we are on the far end of the Prom, we decided to try out the pub nearby. It’s called the U street pub, assuming because it is on U street! Everything in this town is quaint and quirky and I love it! This pub was no exception. Funky decorations, rows of old beer taps on the ceilings, rolls of butcher paper for the kids to draw on. It was great! They welcomed kids no problem, but their rule was ‘This is not a playground, but an adult establishment, that allows children’. I had a turkey sandwich (my first non-seafood meal of the whole trip!) and Sean ended up ordering clam chowder and fish and chips. He said it was the next clam chowder of the trip! The server was super pleasant, even though they kept running out of beers that they had on tap, and even let the boys hang up their artwork on the walls. 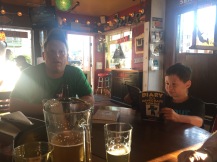 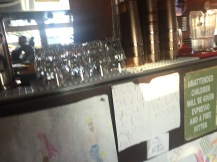 After dinner, the boys wanted to go for a walk on the Prom with their bikes. We thought we were just going to down a little bit and come back, but we ended up back in town. We went to the arcade again and played $20. The adults in our group became a bit obsessed with this game that you shots tokens onto a shelf and it pushed the other tokens into another shelf below that then dropped those tokens and gave you tickets. There was also the chance of winning a Marvel superhero card. And for some reason, we all spent most of our money at this game. It was stupid and irrational, but it is what it is.

In this arcade, there is also a separate room in the middle that has bingo. But not your normal bingo, it is kind of like the horse racing games you see at most fairs. Where you roll the ball, and it either goes in walk, run or trot. But this was bingo. So you rolled the ball and tried to get a line. It was 25 cents a game and at 9pm, you got to play 12 games for $1! Sean got a bingo and we saved the points to put towards all our tickets for the last day. 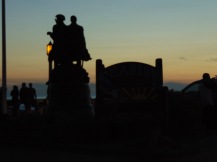 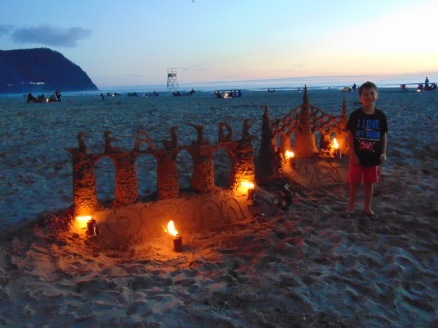 Back to the house, boys got some screen time (finally!) and we played crib with Helen and Dave. We have been letting the boys stay up a bit later while we are on vacation and it is paying off! They have been sleeping in until 9-9:30 every morning! But back to the crib game, we always play girls vs. boys and this time was no exception. Boys won first game, girls won second game, so it all came down to the third. Now, for another fun fact about our family, we are VERY competitive. And it isn’t just Sean and I. It’s the boys, it’s Sean’s parents and it’s even my family! Our kids are screwed when it comes to competitive sports! But one more thing, Sean is a poor winner and a poor loser. So when his mom and I beat him and his dad by skunking them, it wasn’t pretty. He gets a bit sulky.

Day 5 complete! Only 2 more days at our beach paradise!

notes from the hood (parenthood)

writing from the front lines

Stories of our crazy, amazing family

Life, kids and a glass of red

The laughs of life with kids

Family ,Parenting and beyond

Train up a child in the way he/she should go: and when he/she is old, he/she will not depart from it. Prov 22:6

The gradual supplanting of the natural by the just

Life On The B Side

All In A Dad's Work

It’s about husbanding, daddying, and a dog.

BOOKS FROM DUSK TILL DAWN

Each night I TRAVEL THE WORLD, I LIVE IN THE MIND OF KILLERS AND WALK AT THE SIDE OF HEROES

Motherhood at its Finest